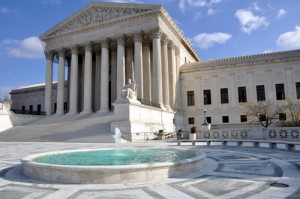 This morning brings major articles in both The Times and The Post discussing the possibility of a Citizens United opinion this week from the Supreme Court.  The Times writes here that

[i]f the Supreme Court, as widely expected, rules against core elements of the existing limits, Democrats say they will try to enact new laws to reinstate the restrictions in time for the midterm elections in November. And advocates of stricter campaign finance laws say they hope the developments will prod the president to fulfill a campaign promise to update the presidential campaign financing system, even though it would diminish his edge as incumbent.

The Post reports that the case is “consuming the political world.”

One possibility is that a broad decision declaring the restrictions unconstitutional has drawn lengthy dissents from those in the minority, who have no incentive for rushing the ruling. But equally possible is a failure to find a majority for such clear guidance and a multitude of competing opinions in which a narrow majority agrees only on the outcome in this specific case.