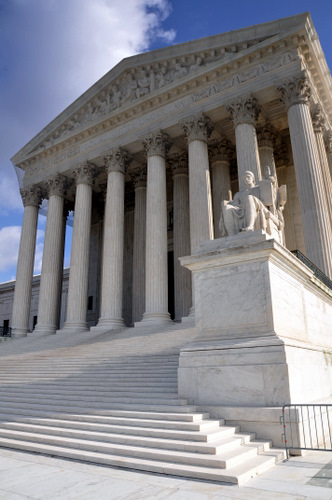 We’ve had Citizens United for ten hours.  News round-ups abound.  A proprietor of a neighborhood barbershop can now put a sign up in his shop window supporting the candidate of his choosing.  A large corporation can run a few million dollars in ads expressly supporting a candidate for office.  A number of law firms have issued client alerts, like this one, this one, this one, and this one.  A lot of interest groups issued releases, including PIRG, the Center for Competitive Politics, Democracy21, and CATO.  The President issued a statement.  The relevance of blogs (yay me!) and YouTube were cited in the opinion.  (It’s the Court’s first use of the term “blog,” according to Volokh.)  There’s a lot to digest.

So, which Fortune 500 company is going to be the first to “play”?  Well, not so fast.  In its amicus brief, the Democratic National Committee explained that

[c]orporate “independent spending,” if sanctioned by a reversal of Austin, raises a host of other questions unique to the corporate sector.  For example, may a corporation running a full lobbying operation in regular contact with Members successfully establish independence from those same Members when proposing to spend without limit on their campaigns?

This isn’t a new question to large non-profits and some PACs, but the question might require a little more than ten hours’ thought to answer wisely in a post-CU world.

Much, much more on Citizens United to come.

P.S.  To answer my own question from July:  The Supreme Court says, “No.”