CFR:  DO WE CARE?  WP.  “A new Pew Research Center poll is the latest indicator of how little attention people pay to campaign finance matters. It also underscores the challenge Democrats face this year as they seek to make the billionaire Koch brothers into an electoral issue.”

COMMISSIONERS’ LETTER.  NYT.  “Our Federal Election Commission colleague Ann M. Ravel would rather grandstand than follow the law and judicial precedent. We enforce the law as written by Congress and construed by the courts, not as our colleague and her ‘reformer’ allies wish it were.”

COMMISSIONERS’ STATEMENT ON AUTHORIZING DEFENSE IN PUBLIC CITIZEN.  FEC.  “For nearly forty years, votes to defend the Commission in cases challenging dismissals of administrative complaints have been routine, pro forma acts. Even when the Commission has split on whether to proceed in an enforcement matter, the decision to defend has been uncontroversial. In recent days, however, our colleague Commissioner Ann Ravel has announced her desire to upend this consensus. Not only does this effort derail longstanding Commission practice, but more troublingly, it contravenes well-established legal precedents and evinces a flippant disregard for judicial review.”

LITTLE CHANCE FOR CFR.  New Yorker.  “On this week’s Political Scene podcast, Jeffrey Toobin and Ryan Lizza join host Amelia Lester to discuss the Supreme Court’s recent decision in McCutcheon v. Federal Election Commission, which removed a limit on the total amount of money a donor can give to multiple candidates in one election cycle.”

GUILTY PLEA.  Fox.  “The co-owner of a La Jolla luxury car dealership pleaded guilty in federal court Thursday to eight misdemeanor counts of campaign finance crimes, including conspiracy, aiding and abetting contributions by a foreign national and making a “straw” contribution in connection with a federal campaign.”

STARTING AND ENDING A SUPER PAC.  WP.  “A super PAC filed its statement of organization with the Federal Election Commission in late January, but never raised any money and went out of business this week.”

CA:  PERSONAL USE PROPOSAL.  SacBee.com.  “Politicians facing criminal charges would not be allowed to use campaign funds to pay their legal bills under an amendment Sen. Jerry Hill said he plans to introduce in the wake of the indictment of his colleague Sen. Leland Yee on charges of corruption and conspiracy to traffic weapons.”

CA:  D PARTY UNDER INVESTIGATION.  Contra Costa Times.  “The political committee that raises money for and endorses Democratic candidates throughout Alameda County is under investigation after one of its own members questioned the group’s campaign finance reporting practices.”

HAVE A GREAT WEEKEND.  I got out yesterday to take this and other shots around the tidal basin and I’ll post them to my Flickr page soon.  The tidal basin was completely packed yesterday with tourists and photographers from all over the world enjoying the sights.  Enjoy the cherry blossoms soon or you’ll have to wait until next year! 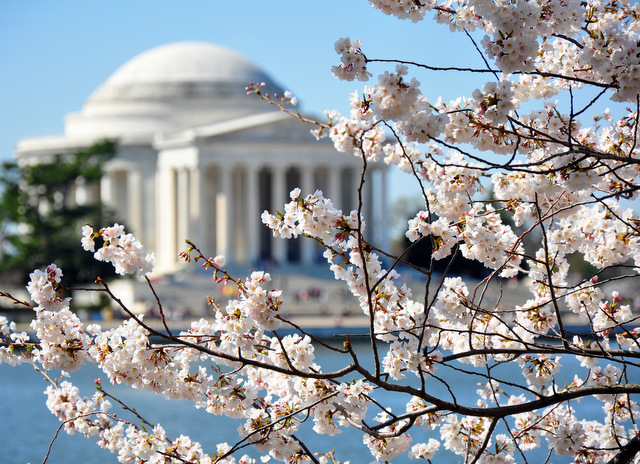