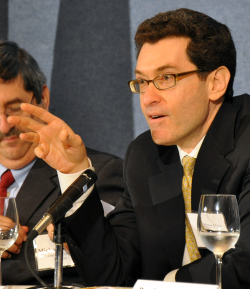 Special Counsel to the President Norm Eisen spoke at Friday’s Brennan Center event and The Politico covers his remarks here.

Eisen, a law school classmate of Obama who volunteered for his presidential campaign, said “having witnessed the small donor revolution taking place firsthand over the past two years, I will point out that … like that other great revolution that resulted in our presence here today — the American Revolution — a revolution can take a long time to institutionalize and to bear fruit.”

In response to a question about whether he would use his influence to urge Obama to advocate for measures reducing the role of money in politics, Eisen got rapturous applause by proclaiming “the best is yet to come. We’re going to continue this fight. We are not going to stop. We are not going to quit, no matter what.”