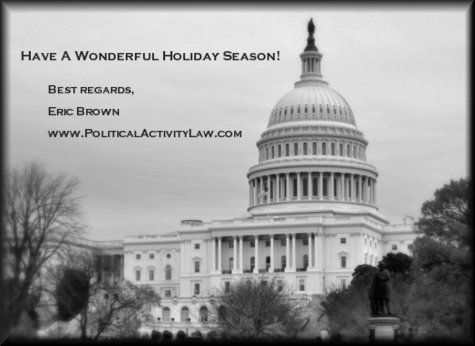 HAPPY HOLIDAYS! Please accept my sincerest thanks for your interest in my political law links. I hope this holiday season brings great joy to you and yours and I look forward to sharing next year’s exciting political law developments with you! I’ll prepare the next set of links in early January, so see you then.

INAUGURAL PREP.   Story here.  “This time, there will only be three days of festivities instead of the four days of parties held for his first inauguration.”

EMAIL IN THE NEWS.  Story here.  “Combine your family dog’s name with the name of your old home town and what do you get? In the case of Environmental Protection Agency Administrator Lisa P. Jackson, you get in trouble with some lawmakers for having a less-than-obvious e-mail handle.”

K ST. TICK TOCK.  Story here.  “Lawmakers and lobbyists are losing hope for several major bills as the clock runs out on the lame-duck session of Congress.”

DC: REFORM IN 13. Story here. “Despite months of rhetoric and proposals, D.C. lawmakers failed to pass sweeping campaign finance reforms by the end of a legislative period that was historic for all the wrong reasons.”

NJ:  CHRISTIE GOAL.  Politico.  “Top donors to New Jersey Gov. Chris Christie’s reelection campaign are telling supporters they hope to raise $2 million by the end of the year, POLITICO has learned — a glaringly large figure in the few short weeks since he announced he’s seeking reelection.”

NYC: RESIGNING FOR RUN? The Times. “Joseph J. Lhota, the chairman of the Metropolitan Transportation Authority, has informed the Cuomo administration that he is stepping down from his position, according to four people with direct knowledge of his plans. He is expected to resign on Friday and pursue a candidacy for New York City mayor as a Republican.”

TN: LIFT CAPS, MORE DISCLOSURE. Here. “Repealing the campaign contribution caps would have to be accompanied by a mandate for more timely and accurate disclosure of who is giving what to whom.”