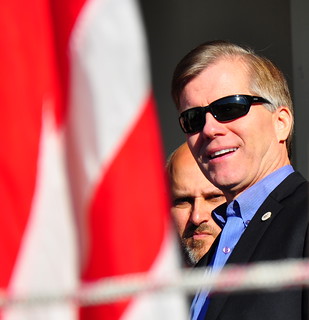 MCDONNELL OPINION ANNOUNCED:  The Supreme Court announced its unanimous opinion in McDonnell today, overturning the convictions of former Gov. McDonnell.  The opinion is online here.  The opinion narrows the concept of what constitutes an official act under the statute at issue and will have an impact on future decisions to prosecute.  The opinion explains:

In sum, an “official act” is a decision or action on a “question, matter, cause, suit, proceeding or controversy.”  The “question, matter, cause, suit, proceeding or controversy” must involve a formal exercise of governmental power that is similar in nature to a lawsuit before a court, a determination before an agency, or a hearing before a committee. It must also be something specific and focused that is “pending” or “may by law be brought” before a public official. To qualify as an “official act,” the public official must make a decision or take an action on that “question, matter, cause, suit, proceeding or controversy,” or agree to do so. That decision or action may include using his official position to exert pressure on another official to perform an “official act,” or to advise another official, knowing or intending that such advice will form the basis for an “official act” by another official.

POST-MCDONELL WORLD.  DB. “The Supreme Court just threw a lifeline to politicians looking to play and get paid—and perhaps even to some big fish in New York who have already been caught and convicted for doing just that.”

CONVICTIONS VACATED.  Richmond.com.  “A Richmond jury convicted Virginia’s 71st governor and his wife, Maureen, in September 2014 for accepting more than $177,000 in gifts and loans from Jonnie R. Williams Sr., then-CEO of Star Scientific, in exchange for promoting the company’s dietary supplement, Anatabloc.”

LIPTAK ON CASE.  NYT.  “Prosecutors may seek to retry Mr. McDonnell, but under a stricter standard.”

DOJ UNDER FIRE.  FCPA Blog.  “The Supreme Court said Monday it was concerned ‘with the broader legal implications of the governments’ boundless interpretation of the federal bribery statute. A more limited interpretation of the term ‘official act’ leaves ample room for prosecuting corruption, while comporting with the text of the statute and the precedent of this court.'”

SPEAKER HOWELL STATEMENT.  Here.  “Throughout this process, and even in the darkest hour, the depth of Bob’s character was on full display.”

DEEP IMPACT.  WP (Cillizza).  “What the ruling will do is have a potentially profound effect on future cases involving allegations of public corruption against politicians.”

SPARED FROM PRISON.  NBC.  “And it spares McDonnell from having to report to prison to serve a two-year sentence. Prosecutors could seek to put McDonnell on trial again but with different jury instructions on the definition of corruption.”

UNANIMOUS OPINION.  WP.  “McDonnell’s promising political career was derailed by his entanglement with a businessman who showered McDonnell and his family with luxury gifts and financial benefits.”

ROBERTS WRITES.  CNN.  “Writing for the court, Chief Justice John Roberts set a clear definition of that term and how it can be used in corruption convictions.”

CASE COULD HELP ACCUSED.  This old Washington Post article mentions a few of the officeholders and former officeholders this case might help.

OVERTURNED.  WTOP.  “The court agreed with McDonnell’s argument that the instructions given to a federal jury in Richmond were overly broad.”

DISTASTEFUL NOT ILLEGAL.  WSJ.  “The Supreme Court, in a disapproving tone, cited the gifts in detail, including a luxury watch, designer clothes and the former governor’s borrowing of fancy sports car.”

TOO BROAD.  Politico.  “The decision from the eight-justice court could make it tougher for prosecutors to prove corruption cases against politicians in cases where there is no proof of an explicit agreement linking a campaign donation or gift to a contract, grant or vote.”