FACADE FOR FEC’S NEW HQ?   I don’t know if the FEC is taking suggestions, but I think borrowing this idea as I think has been suggested before from the outside of the Newseum might be appropriate.  Maybe the FEC can make it larger? 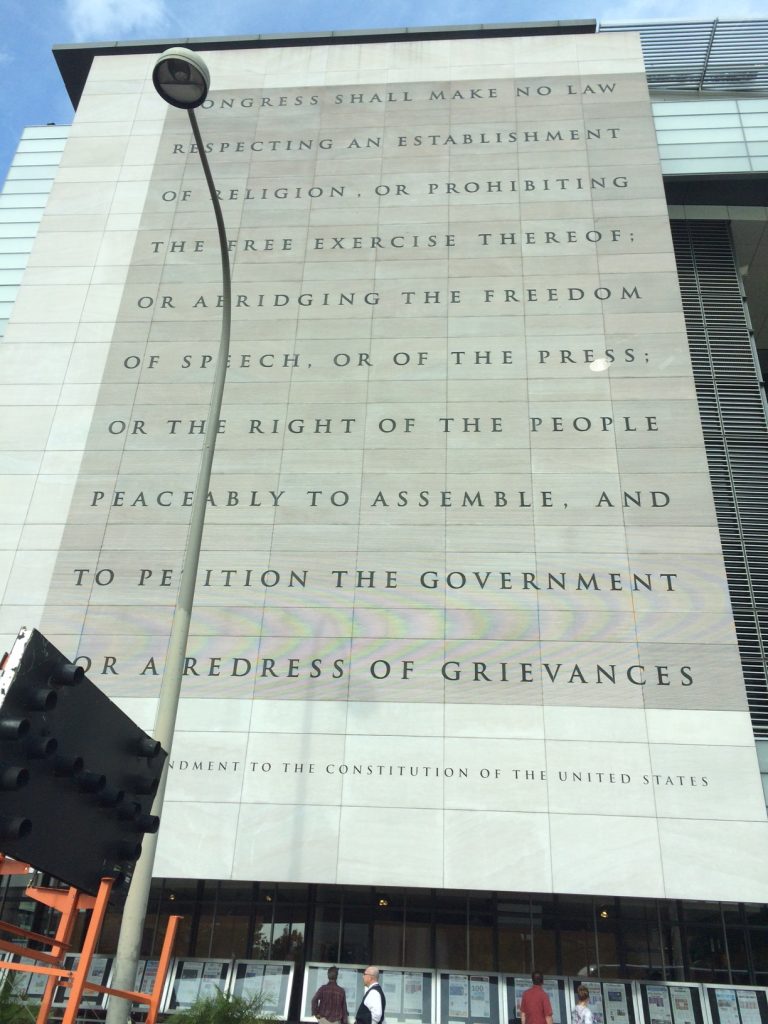 GOOD MONTH.  Politico.  “The main super PAC supporting Hillary Clinton had its best fundraising month in September, fueling a sustained barrage of ads and gifts to other left-wing groups.”

BING CASH TOOL.  M.  “Location data on vendors that serve campaigns and super PACs is fed into Circa Victor’s system in real time, giving visitors a rough picture of how much each candidate is spending in each state.”

GETTING HIT.  SF.  “For the first time, Trump is actually getting hit by a strong opposition super PAC campaign. Priorities USA Action, which backed President Barack Obama in 2012 and includes such liberal megadonors as George Soros, Fred Eychaner and Donald Sussman, is working to elect Hillary Clinton.”

SPENDING UP.  WP.  “Donald Trump’s presidential campaign spent $70 million in September — more than double the previous month — as the GOP nominee made a slew of last-minute investments in ads and voter data, according to a new campaign finance report filed Thursday.”

THE BOSS AND POLITICS.  BJ.  “The study showed that when a CEO donated to certain candidates, employees tended to also donate to those candidates, but that if that CEO was replaced by a person who donated to different candidates — even in situations when the chief executive was replaced amicably or in a planned procedure, thus suggesting no major changes in a company’s core political environment — employees followed the new leader when choosing where to donate.”

BOOKS AND MOVIES TARGET.  TDS.  “The FEC hasn’t spoken in a unanimous voice about what Goodman and others say are basic matters of free speech under the First Amendment. Rather, various commission votes open the door to applying campaign finance laws to movies, books, and other media rarely ever considered before as campaign contributions.”

ABEDIN INVOLVED.  FN.  “Just hours after Hillary Clinton dodged a question at the final presidential debate about charges of ‘pay to play’ at the Clinton Foundation, a new batch of WikiLeaks emails surfaced with stunning charges that the candidate herself was at the center of negotiating a $12 million commitment from King Mohammed VI of Morocco.”

NO QUESTIONS.  PM.  “Once again, however, I found myself disappointed. Though he delivered on certain topics, several major issues were left undiscussed. Namely: the environment and of course, campaign finance.”

AZ:  PLEA FOR APPEAL.  AZC.  “A dark money group urged the Arizona Court of Appeals to allow it to challenge the Citizens Clean Elections Commission’s authority to levy a $96,000 fine against it after a judge ruled that it missed the deadline for filing an appeal, a case that could settle the long-running dispute over the extent of the commission’s jurisdiction.”

CT:  GIVE LAW TEETH.  HC.  “More than a decade after Connecticut passed the toughest clean election laws in the country, why are bribery, corruption, illegal donations and misuse of campaign funds still part of our political landscape?”

OR:  FILING ISSUE.  TW.  “An investigation by The World has found that while Coos Bay mayoral candidates Crystal Shoji and Joe Benetti appear to have complied with Oregon campaign finance law regarding timely filings, Mark Daily has not.”