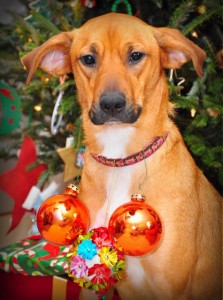 HAVE A GREAT HOLIDAY BREAK.  I hope you and yours have a wonderful holiday break.  I’ll be taking some time away from the site after today’s post, so please have a safe and enjoyable holiday season.  As you can see at right, Rosie’s in the holiday spirit. Remember her?  She’s our family pet (and the official PoliticalActivityLaw.com mascot) who’s been with us a year since we adopted her last December.  She didn’t appreciate the holiday decorations, as you might guess from her expression, but was amply rewarded for her patience with her favorite treats.  And there will be delicious deer antler bone in her stocking this year.  Happy holidays and all the best!  And now back to our regularly scheduled programming…

NO PRISON.  NYT.  “A Democratic fund-raiser and high-profile hotelier, Sant Singh Chatwal, who had pleaded guilty to skirting federal campaign-finance laws and witness tampering, avoided being sent to prison on Thursday, despite facing a possible sentence of more than five years.”

INTERNET REGULATION AND 15.  SacBee.com.  “Ravel is the former California Fair Political Practices Commission chairwoman who came from the Silicon Valley, where she had been Santa Clara County counsel. President Barack Obama placed her on the FEC last year.”

AR:  CONSULT ATTORNEYS.  Ledger-Enquirer.  “A lobbyist for the University of Arkansas at Fayetteville is urging state lawmakers who received free parking permits in October for football games to consult with their attorneys following last month’s voter approval of a constitutional amendment that bars state elected officials from accepting certain gifts.”

CA:  INDEPENDENCE QUESTIONS.  Richmondconfidential.org.  “The murky situation could spell trouble for elections across the country as underfunded watchdog agencies and hazy campaign finance rules may be ill-equipped to deter coordination between committees and candidates.”

HI:  ERROR AND FINE.  Mauinews.com.  “The state Campaign Spending Commission has fined a super political action committee $3,100 for, among other things, failing in at least one instance to link a campaign expenditure with former Maui County Council candidate Ka’ala Buenconsejo.”

PA:  GIFT BAN BILL.  PPG.  “Pennsylvania lawmakers’ willingness to stop taking gifts from lobbyists, state contractors and other people who want to influence state government is about to be tested.”

PA:  STING CHARGES.  Philly.com.  “So far, Williams has now brought criminal charges against three of the five Philadelphia Democrats caught up in the sting, and one of the three has pleaded guilty. The remaining two are still under investigation.”

FRA:  UNDER FIRE FOR FRAUD.  France24.com.  “A French court on Friday said the far-right mayor of the northeastern town of Hayange failed to declare all of his campaign spending to authorities, in a decision that will likely cost him his job and further embarrass the National Front.”

HAVE A GREAT HOLIDAY SEASON!